Being inducted into the PSA Hall of Fame is a great honor.  It recognizes those dogs and handlers who have had a great impact on the sport.  They will forever be remembered for the contributions they made to making the sport what it is today. 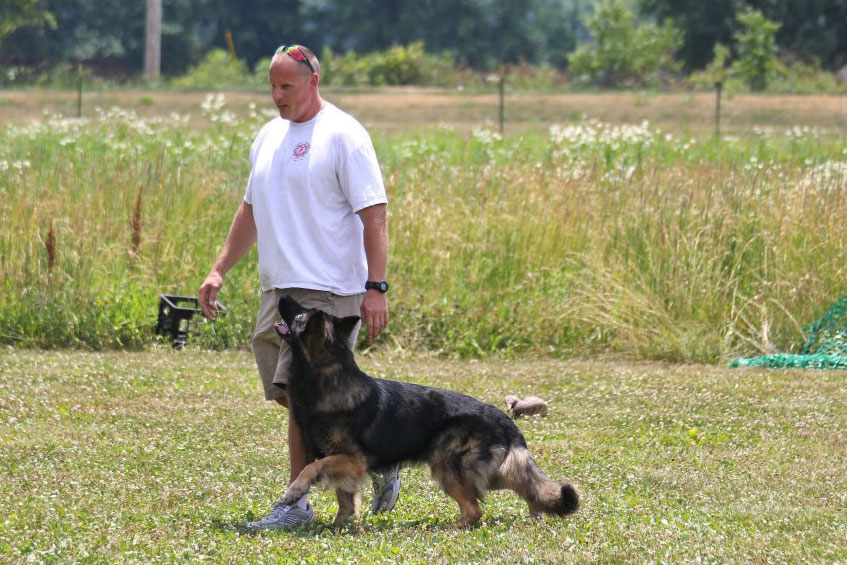 Moses achieved his PSA1 at just over two years old. Joe said “We then failed our level 2, 12 times. Passing successfully on try 13 and 14 becoming the first GSD to achieve this title.”  Moses achieved his PSA3 2014 becoming the 12th dog to achieve this honor. Moses passed away in 2016 and received a posthumous hall of fame induction in 2017. He is greatly missed by Joe and his family and all of us in PSA. 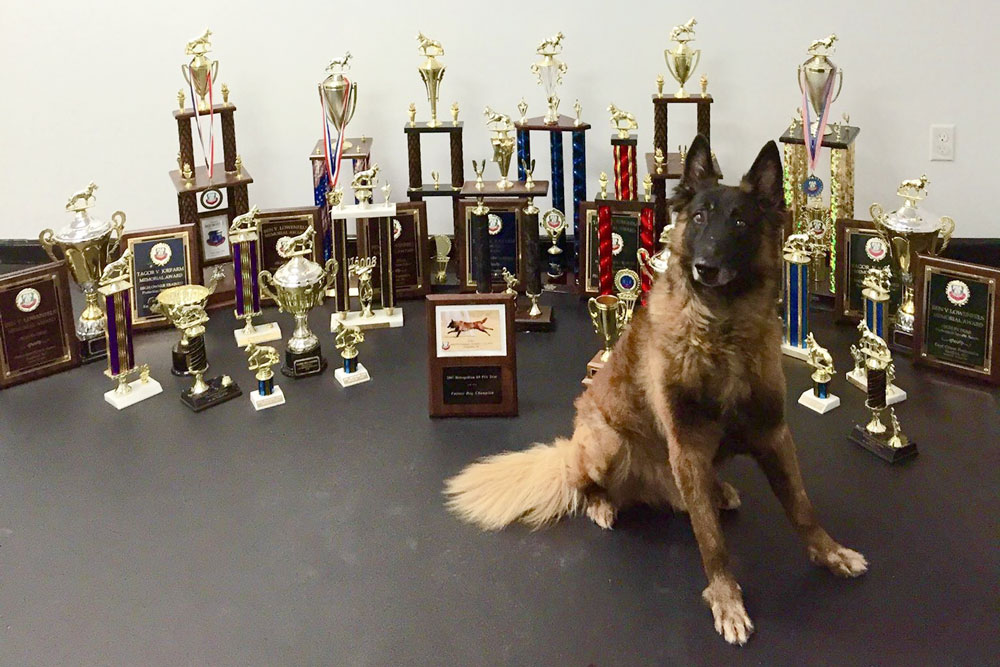 I acquired Zuko (Cartuck van Joefarm) at 9 months old as my first competition dog and from the very beginning achieving a PSA 3 was my ultimate goal.  I had grown up playing sports and chose PSA as a way to stay involved in something that was both competitive and required discipline. I know that I made many rookie mistakes along the way and Zuko could not have been more forgiving and/or a better dog for a first time handler. Zuko trusted me yet was independent in his work, he was not a soft dog yet was responsive to correction, he was a fast dog with powerful grips, he was unphased by environmental distractions and all of these combined is what made his success on the trial field possible.  I don’t think folks were too sure what to expect out of this long-haired Malinois but I knew in my heart this dog would take on whatever I threw at him.

My goal as a handler was to earn titles and place at each trial. The first trial we entered was in 2007, we passed our PSA 1 (PDC was offered but not required at that time) and placed 3rd.  I was upset with myself on some handler errors that cost some points but overall happy that we passed on our first try and took home a trophy. The next trial we passed again and then took 1st place, High Obedience, High Protection as well as all of the PSA plaques.  I was shocked as I NEVER expected to get these.  The streak continued through Nationals along with my shock on earning so many awards. We also earned the High Overall Score award for level 1 that year, an award that I didn’t even know existed.  This year I truly felt that Zuko carried me through the competitions.  We were the 2007 level 1 National Champions.

We then prepped for level 2 and after a couple of showings in that level, Zuko got injured.  Not a huge injury but one that pestered our training time.  This set us back on time but neither of us lost an ounce of will.  In 2009 we earned our PSA 2, earned more hardware and were the level 2 National Champions.

In 2010 we showed for the first time in level 3 at the East Coast Regionals taking 1st place and winning High Obedience and High Protection.  We showed for the second time at Nationals and were the 2010 level 3 Vice Champions.  In 2011 Zuko came down with Lymes Disease. He seemed to be responding to the treatment and we were able to get some time on the field, earning our first leg of our PSA 3 in June of that year. Right after that trial, things went downhill with the Lymes Disease and I wasn’t sure if Zuko would ever step on a trial field again.  The Lymes inflamed his previous injury, he was unresponsive to the usual treatment and had a bad reaction to the medication causing other health issues and even seizures.  We both fought through this time and we were able to find the correct treatment for him. I was able to rehab him back to working again just in time to show at Nationals where we closed out our PSA 3 title.  I decided to retire him at this point but that only lasted until a few weeks out from the 2012 Nationals.  He was physically doing well so we knocked out some training sessions and registered for Nationals strictly to have fun and allow Zuko to do what he loved the most.  He left me in shock once again, becoming the 2012 National Champion and earring the High Obedience and High Protections trophies.  This was his final showing in PSA and the perfect way to end his career.

Zuko’s legacy continues in the sport as he has numerous offspring titled in PSA, including two sons with a PSA 3. 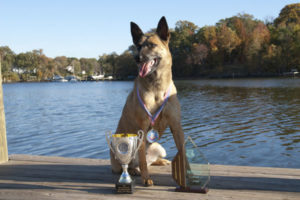 Asja.  What can you say about Asja?  What can’t you say about Asja?  Versatile.  Social.  Badass.  Many said, when she was in her prime, that she was “the hardest biting bitch in PSA.”  Many considered her to be one of the hardest bitches in the country.  She wasn’t always the dog that got the “oohhs” and the “aaahhhs,” but she always went onto the field and worked her tail off for Greg.  She was devoted to him.

Asja started her PSA career in 2006, at three years of age, in Baltimore, MD.  She showed in the Level 1s five times, earning honors all but one of those times.  She earned the first leg of her PSA 2 at Nationals in Farmingdale, NY, in 2007, and finished in 2nd place.  She closed out her PSA 2 in Baltimore, MD, at East Coast Regionals, with honors, and was the East Coast Regional Champ for 2008.

On a dare, Greg showed Asja for the first time in the PSA 3 in Stafford, VA, in May 2009.  Not expecting much, and having not really trained for it, Asja surprised everyone, and earned the first leg of her PSA 3 – the very first time she was shown in that level.  She closed it out a little over a year later, again in Stafford, VA, in August 2010, and did so when PSA rules required competitors to earn 80% of the points in obedience and each protection scenario, and each scenario was worth 60 points rather than 50.  Asja earned her PSA 3 more times than any other bitch.

Asja stepped on the PSA field for the last time in 2012, at nine years old, with a different handler, and earned her PDC.  Even at that age, her desire to work and to please was strong.  Asja was not only amazing on the field, though.

Asja was an amazing companion to Greg, and then to Greg and Katrina.  She was often found hanging out on the couch, and, at night, when she would disappear, you could easily find her in their bed letting them know it was time for bed.  Sadly, Asja developed lymphosarcoma in July 2015, and lost her battle just two months later on September 3, 2015.  She will forever be missed, but left her mark in the hearts of everyone who knew her, as well as on the PSA trial field. 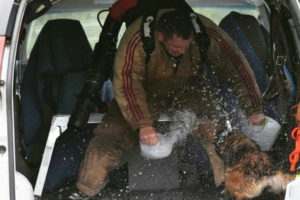 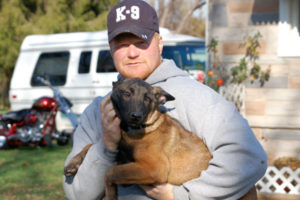 Greg is a seasoned veteran on the trial field, a top competitor, and serves as a decoy, judge, and as the West Coast Director. Greg has been an active competitor and decoy since PSA’s inception. It’s his abilities in handling that have gained him notoriety in PSA. Greg has titled a total of nine dogs as well as three different breeds in the sport, giving him the most dogs titled in the sport, titling four of those dogs in the same trial taking 1st and 2nd in the PSA 1 open and 1st and 2nd in the PSA 1 novice in 5/31/03.

Greg’s most memorable accomplishments in PSA are; 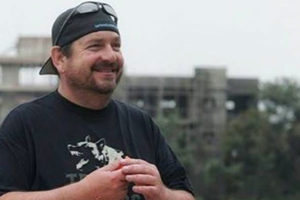 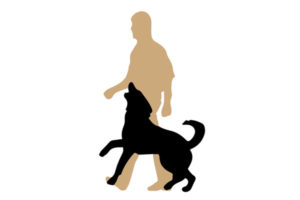 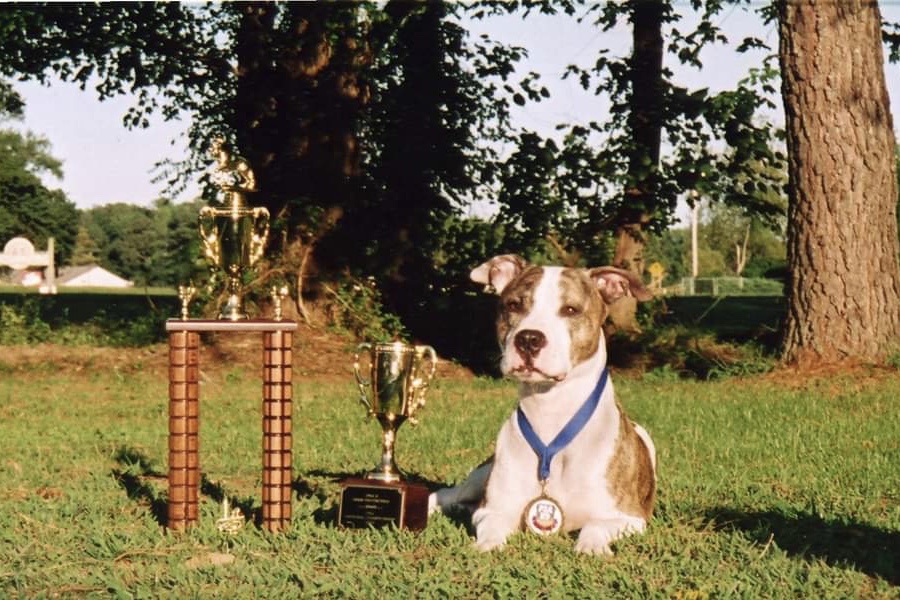 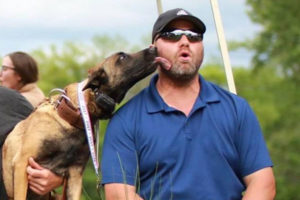 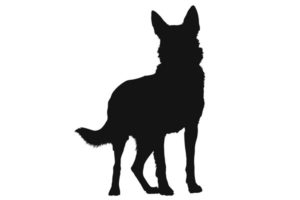